During the visit of the Portsmouth RI contingent to Portsmouth UK during the period June 1 through 7, 2014, they took on the additional, but important, mission to experience the social aspects of the South UK by visiting many places of social exchange and libation (aka “pubs”).

The group visited and evaluated over 25 such establishments during their trip. 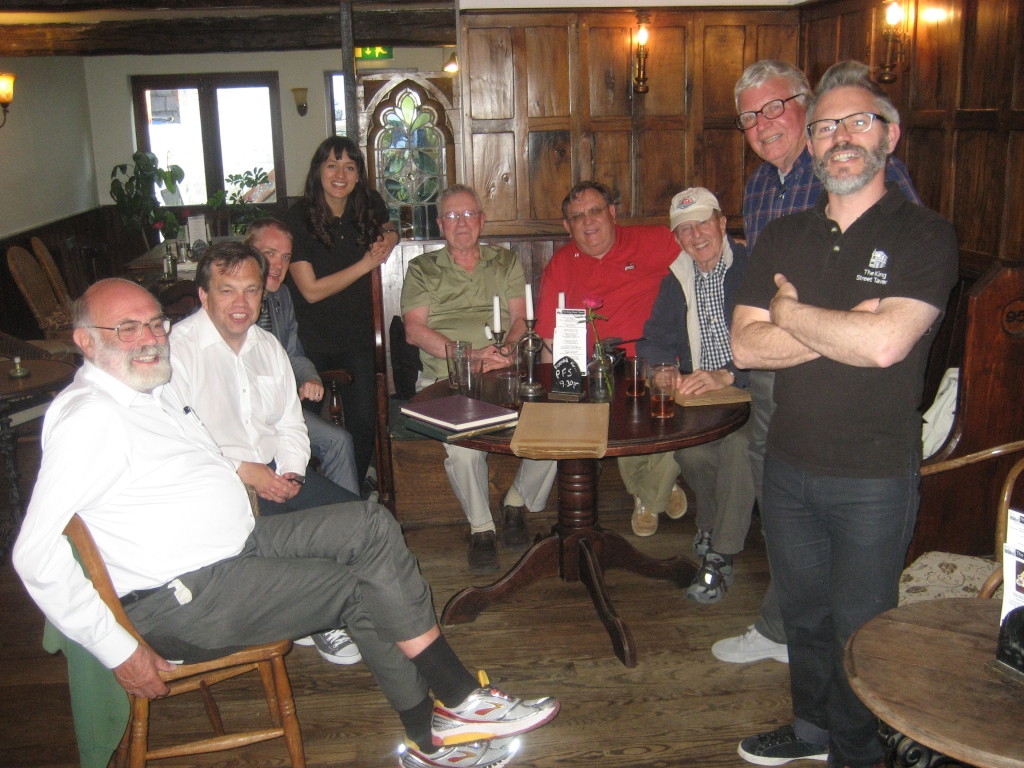 At the King Street Pub 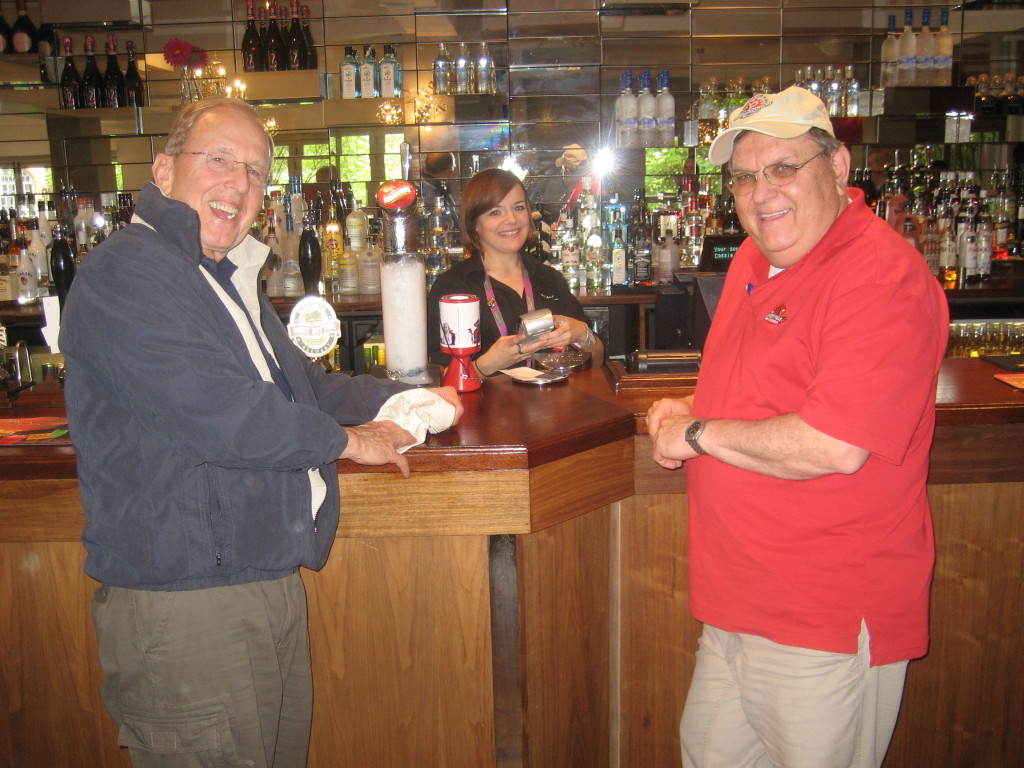 Official Video of Our Pub Mission

Background: A group of five guys from Portsmouth, RI were visiting our namesake city of Portsmouth, England in early June 2014 on town business. Having been there the year before, we knew of the many pubs located in the environs of that great city and decided that we should conduct some kind of a survey of as many pubs as we could in the one week we were going to be there. The idea was to establish a set of criteria, use them to grade each pub we went to and then tally the scores to identify our favorite pubs. To be clear, this would be an American perspective on British pubs and thereby biased by our preconceptions of what an ideal pub was supposed to be like. This initial survey results would be posted on our Portsmouthatlantic.org website for all Portsmouth’s on the Atlantic to share. Future surveys would also be conducted in Portsmouth, VA and NH. In turn, we would invite survey groups from these cities to do the same.

The Criteria: After some discussion, we settled on the following ten criteria:

Each attribute was given a score from 1 to 5 points, for a total of 50 points possible. Final scores were based on a group vote and discussion. A visit by at least two group members were required to score a pub (most were visited by all five members).

Listed below, based on our individual scores and a group discussion, our ratings visited  pubs. We recognize that these ratings are highly subjective and based on how these five specific Americans considered that British Pubs should be like. (They are listed in alphabetical order within each category)

Reflections of the Travelers

Since the impression of the pubs were largely subjective, we thought it to be good to provide the following reflections on the pub visits by each of each of the travelers. 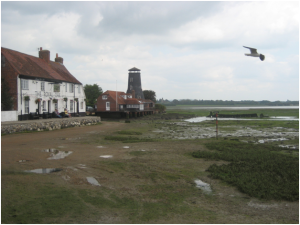 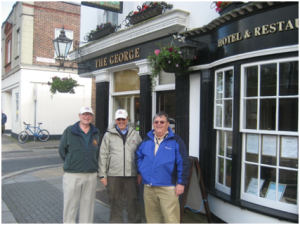 At the George Hotel and Pub on the ‘Hard’

“My favorite Pub was the “Royal Oak” in Havant, just outside Portsmouth., probably because it combined a waterfront setting with a cozy, friendly “old English pub” look. At high tide, you could walk out the front door and fall into the water. The owner and staff were very friendly, even to obvious “Yanks”, and were happy to chat about their pub’s history. They had just gone through a tough winter, with many storms, some of which drove rain and seawater over the doorsills. When I asked what they did when that happened, they just said “why …we just pull our boots up and kept on drinking.” A lovely waterside pub, even thought we were there at low tide and only saw a huge mudflat with many boats on moorings scattered about on the hard. 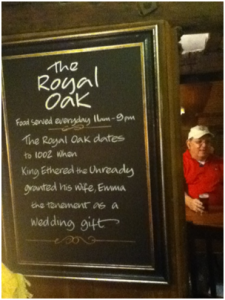 I have to also give a nod to the other “Royal Oak”, located in Winchester. This pub was said to be the oldest in England, dating from 1002, when it was established by the wife of King Ethered the Unready. With a name like that, we unanimously made King Ethered the patron Saint of Pub Survey’s!

I also like the “Hole in the Wall”, the “King Street Tavern” and “The George”, a RN favorite, just outside the Naval Base. 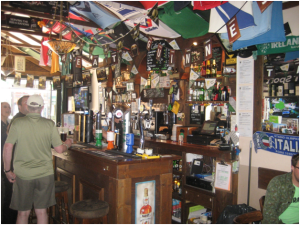 My favorite sports pub was “Shenanigans”, owned by a retired Royal Navy Petty Officer and undergoing a major remodeling while we were there.  The owner was a very nice guy and very proud of his pub.

As you can see, it was very difficult to just pick one favorite pub. All had something unique and special about them, but I found the ones with long histories especially interesting. As the Headquarters of the Royal Navy for  hundreds of year, Portsmouth has a wide variety of old and modern pubs and it often seemed that there was a pub on every block. There are many more that deserve our attention – perhaps we can get to some of those the next time we are over there.”

“I really can’t choose between the ‘Hole-in-the-Wall” Pub and the “King Street” Tavern as my favorite for what I consider THE neighborhood British pub. Great hand-drawn ales, excellent atmosphere to relax in and even the occasional well behaved dog lying under the table make them both places I want to visit again.   Having said that I think that “The Isambard Kingdom Brunel” Pub/Inn in Portsmouth City Centre deserves mention as another excellent pub where Excellent ale, good food and  a more “urban” crowd can all be enjoyed and that I will also want to visit again especially around meal time.” 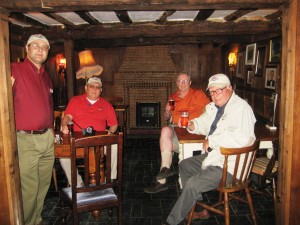 “Having visited the UK many times, this was the first time I was asked to actually evaluate the pubs that we were to visit AND to compare the pubs to what might be the closest resemblance to places in the U.S.   My feeling of most of the pubs in the UK was that they were truly places of social exchange. In the U.S., many comparable establishments have turned into places where people keep to their own isolated cliques eating or watching some sports events on the TVs.  More like the neighborhood bar of U.S. yesteryear, UK pubs are quiet places where people meet and interact.  Although it was a difficult choice, my favorite was the Royal Oak Pub in Winchester. The people were friendly and much of the original structure was preserved.   It was an intimate establishment that made you feel like you had stepped off a coach in the 14th century for a bit of refreshment.  The Royal Oak in Havant a close second.    The intimate setting of the Hole in the Wall made it nice and cozy.  However, the many times we visited and the many friends (and the dog) we met there may have favorably skewed my opinion of it — and the interaction between the ‘cat and the dog’ at the Florence Arms was also a memorable experience.  I could go on and on because most pubs we visited had their own unique atmosphere.  That is why ‘pub hopping’ in the UK is such a worthwhile endeavor.  Some people call it a ‘pub crawl’ but that really demeans it, because none of us were ever inebriated and the trek on foot between pubs was really a great way to walk off the calories (except, of course, when Doug’s shoe gave out). ” 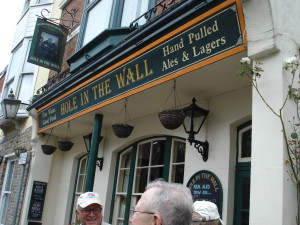 “If my aging memory serves me right we were told there were approximately 200 pubs in, and near vicinity, of Portsmouth, UK.  With limited time available our small group only had a chance to visit twenty-six. From, we believe the oldest in the UK, The Royal Oak in Winchester (est. 1002), into the 20th century. It seems most all pubs, proudly display a varying assortment of commercial, local and house brewed ales and ciders. My preference was for the very dark house brew, all of which I enjoyed tap warm out of the barrel. I, the “Loo Master”, was responsible for inspecting the “loo”, my criteria was “If I dropped my gum on the floor would I pick it up and start chewing again”. One met this criteria; The Jolly Sailor with The Slug and Lettuce, Royal Oak Tavern in Havant, The Fat Fox, Yates and The Hole in the Wall close behind. For a few I would be inclined to ask if there was a tree and a hand basin out back.

Everything taken into consideration, I believe my number one choice that met out simple criteria was The Royal Oak in Havant. A picturesque, clean and friendly welcoming pub, decorated as you would picture such a seaside pub. Ample seating outside is Ideal for a gathering of family and friends to watch the gulls as the tide makes it’s way over the expansive mud flats.

The Jolly Sailor Bar and Restaurant in Southampton is also waterfront memorable. A bit of a descending walk from the upper level of street parking to a yacht club basin. An evening of “downed pints” would make the climb back up an adventure.

Visiting all these pubs was an experience for the “Yanks” across the pond. Surely within the other 170, more or less pubs we could not visit, some would certainly surpass our brief encounters. With the making of new friends, a touch of touristitis,  sampling  wonderful local libations and food makes this excursion into UK history a lasting fond memory.

On the subject of food, and to the ridicule (i.e., disgust) of my less than connoisseurs of fine food companions, I must strongly recommend the preparation of the Sheep Liver and Mash dinner at The Ship and Castle. Certainly something to ‘baa’ for.”